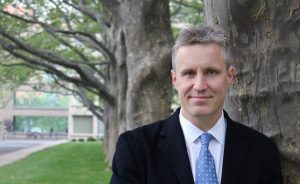 Electrokinetic phenomena have been extensively studied for the past two centuries, but mainly under the assumptions of linear response and single-phase flow. Interfacial motion is a fundamental source of nonlinearity and instabilty in multi-phase flow, which has been considered in electrohydrodynamics for leaky-dielectric interfaces (e.g. Taylor cones) but mostly overlooked in electrokinetics for electrolytes in charged porous media. This lecture will describe three fundamental interfacial phenomena – viscous fingering1, deionization shocks2,3, and dendritic electrodeposition3 – whose stability can be controlled by electro-osmotic flow and surface conduction, as evidenced by both theory and experiment. Possible applications include electrically enhanced oil recovery1, water purification by shock electrodialysis3, and metal batteries enabled by shock electrodeposition4.

Martin Z. Bazant is the E. G. Roos (1944) Professor of Chemical Engineering and Mathematics and Executive Officer of the Department of Chemical Engineering at the Massachusetts Institute of Technology. After a PhD in Physics at Harvard (1997), he joined the MIT faculty in Mathematics (1998) and then in Chemical Engineering (2008). He is a Fellow of the International Society of Electrochemistry and of the Royal Society of Chemistry and winner of the 2015 Kuznetsov Prize in Theoretical Electrochemistry. He also serves as the Chief Scientific Advisor for Saint Gobain Ceramics and Plastics, Nortboro R&D Center.