Levich Institute Seminar Announcement
To be presented via Zoom
Tuesday, 03/23/2021 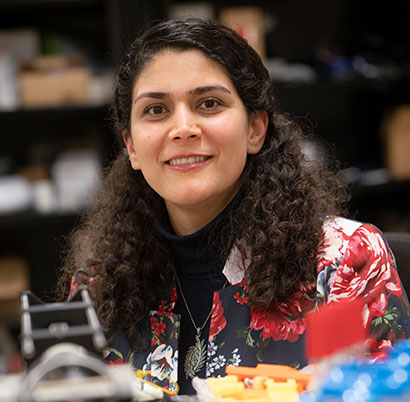 The interaction of motile microorganisms and surrounding fluids is of importance in a variety of biological and environmental phenomena including the development of biofilms, colonization of microbes in human and animal bodies, and formation of marine algal blooms. Complex fluids are pervasive in microbial environments and can have profound effects on the motility of microbes, affecting fundamental microbial processes such as their ability to take up nutrients and colonize surfaces. In this study, we scrutinize the role of rheological properties of the surrounding fluid on the motility, spatial distribution, and collective behavior of microswimmers in complex fluids.

Professor Ardekani is currently a professor at the Purdue University and is a fellow of American Society of Mechanical Engineers. Prior to joining Purdue in 2014, she was O’Hara Assistant Professor at the University of Notre Dame and a Shapiro Postdoctoral Fellow at MIT. In summer 2016, she was a visiting professor at the Institut de Mécanique des Fluides de Toulouse. She graduated from University of California Irvine with her Ph.D. in 2009 and from Sharif University of Technology with her B.S., in 2003. Prof. Ardekani was honored with the Presidential Early Career Award for Scientists and Engineers (PECASE) from President Obama in 2016, an NSF CAREER award in 2012, and awarded Society of Engineering Science Young Investigator Medal and the Arthur B. Metzner Early Career Award of the Society of Rheology in 2020. Prof. Ardekani also received the College of Engineering Early Career Research and the Faculty Excellence Award for Graduate Student Mentorship, and the Sigma Xi Mid-career Research Award, and the Amelia Earhart Award. Prof. Ardekani is the Purdue University Scholar, the Associate Editor of ASME Applied Mechanics Review and Editorial Advisory Board Member of the International Journal of Multiphase Flows and the Journal of non-Newtonian Fluid Mechanics