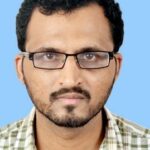 Produced waters are high-salinity fluids that are produced as a by-product during oil and gas production from the wellbores. These fluids are often re-injected in the unconventional reservoirs along with some additives and proppants (silica particles) to induce and sustain fractures, and thereby increase oil/gas production. To enable these fluids to carry the proppants at low viscosities, the fluids are pumped are exorbitant flow rates. Such high flow rates could only be facilitated by drag reduction during flow which may be induced by the polymer additives in the fluid.

The phenomenon of polymer-induced drag reduction is inter-play of two distinct areas of physics, i.e. flow turbulence and polymer dynamics. The present work investigates one additional dimension to this phenomenon, i.e. fluid salinity which influences polymer relaxation and accordingly, governs the ability of the polymer to alleviate drag.  To understand the drag reduction behavior in these high salinity fluids, the current work focuses on addition of two synthesized polymers: first is a co-polymer of acrylamide and acrylic acid, and the second is a ter-polymer of acrylamide, acrylic acid and a functional group.

The classical von-Karman law for Newtonian turbulence, had demonstrated a logarithmic relation between the scaled fluid-velocity vs. scaled wall-distance in a turbulent near-wall region. The literature has also shown that when the drag-reducing polymers are added to the fluid, at a constant pressure gradient, the scaled fluid-velocity would be higher compared to that in the Newtonian case. Further, the phenomenological studies have illustrated that this polymer-induced rise in the scaled fluid-velocity corresponds to drag reduction for the flow; however, this rise has a limit as defined by the Virk’s asymptote. From a slightly different perspective, the same studies reflect distinct drag reduction regimes in the Re-Wi (Flow Reynolds number- Weissenberg number) parameter space; where Wi defines the “coil-stretch” response of the polymer in the fluid. In the present work, we investigate how the fluid salinity affects the polymer relaxation behavior i.e. Wi number and accordingly changes the drag reduction response of the fluid.

For evaluation of the drag reduction performance in the laboratory, an automated flow-loop was built to mimic wellbore flow conditions. Using a centrifugal pump, fluid flow rate in the range of 10 –50 litres/min. was achieved to create turbulent flow condition in a 5 ft long ¼” SS tubing. The flow rate was measured using an electro-magnetic flow-meter while the pressure drop across the ¼” tubing section was measured using a differential pressure transducer. The flow rate is electronically controlled using a VFD and the pressure drop vs. flow rate data is logged on automatically using a PLC and a user-interface. The experimental evaluation was conducted for the fluids with added polymers and with variation in the fluid salinity in the following ranges: NaCl salt amount variation from 0 – 200,000 ppm while the CaCl2 salt amount variation 0 – 55,000 ppm. This variation in fluid salinity cover the most of plausible variations in the field fracturing application of these fluids. Additionally, for evaluation of the viscosity performance of the fluids in the laboratory, a conventional oil-field viscometer was used.

The obtained experimental data was used to build a semi-empirical correlations that predict the polymer relaxation response i.e. Wi number as a function of the fluid salinity. Ultimately, for the studied range of parameters, a correlation between % drag reduction during the flow and polymer Wi number was developed. The experimental data and models also evidently depicted that the synthesized ter-polymer provides a superior salt-tolerance compared to the co-polymer for the range of parameters studied.