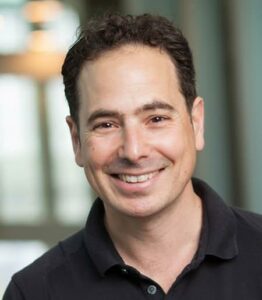 Each year, millions of YouTube viewers watch people walk on water. Of course, these people are not actually walking on water: as stress is applied to a suspension of cornstarch in water, the cornstarch particles come close enough to form force chains that are capable of supporting the weight of a person. While these principles help create popular videos, they can be problematic when it comes to efficient processing of industrial suspensions, which in turn has motivated many studies into this fascinating behavior. In this talk I will review what we understand about thickening, discuss universal features of the thickening transition, show how thickening can be tuned by rapid oscillation protocols to breakup or reinforce the force chains, and describe how we are starting to think of using these techniques to create metamaterial liquids whose viscosity arises from the combination of thickened and Newtonian flows.

Professor Cohen received his BS in Physics from the University of California at Los Angeles, and his PhD in Physics from the University of Chicago. Following his graduate studies, he was a Post-doctoral fellow in Physics and the Division of Engineering and Applied Science at Harvard University. In 2005 he joined Cornell and is currently a professor of Physics. Professor Cohen is an NSF Career grant recipient, he is a Fellow of the American Physical Society, and is the recipient of the Kappa Delta Ann Doner Vaughn Award for his work on cartilage mechanics. He has also served as a Feinberg and Braginsky fellow (2012) and the Rosi and Max Varon Visiting Professor (2021) at the Weizmann Institute and is slated to be the van der Waals Visiting Professor at the University of Amsterdam (2022). He has published over 110 research articles, given nearly 300 invited seminars, colloquia and conference presentations, and co-authored the book Finding Your Research Voice: Story Telling and Theater Skills for Bringing Your Presentation to Life. His work has been covered by various outlets ranging from the BBC, to NPR, and the NYTimes.

Professor Itai Cohen studies the physics of matter in motion. At Cornell, his research has focused on building microscopic robots, controlling the shear thickening behavior of microscopic and nanoscopic particles suspended in a fluid, exploring the mechanics of materials ranging from biological tissues to origami inspired metamaterials, discovering the aerodynamic and neuromuscular mechanisms used by insects during flapping flight, and determining how audiences at heavy metal concerts coordinate their movement. Understanding how emergent behaviors arise from the microscopic rules governing these systems remains one of the biggest challenges in Physics.