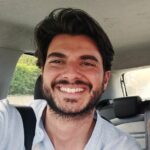 I present a particle-scale simulation method for non-Brownian suspension flows at low Reynolds number, based on the Fictitious Domain Method and supplemented by lubrication corrections. After detailing the implementation of the numerical method in OpenFOAM and the development of frame-invariant sub-grid corrections, I study the role of adhesive forces in frictional suspensions, by varying both intensity of adhesion and volume fraction. In particular, I show that the relative viscosity of the suspension is a function of both volume fraction and shear stress. Then, I investigate the shear-induced particle migration in a pressure-driven channel flow, in which the velocity profile is highly nonlinear. Finally, I compare the results to a modified version of the Suspension Balance Model.

BRIEF ACADEMIC/EMPLOYMENT HISTORY:
I obtained a Bachelor’s Degree in Aerospace Engineering and a Master’s degree in Aeronautical Engineering with a specialization in Aerodynamics, both at Politecnico di Milano (Italy), and I completed the Master’s Thesis at Ecole Centrale de Lyon (France). Then, I obtained a Ph.D. in Physics atUniversité Côte d’Azur (France), during which I worked at the Institute of Physics of Nice (CNRS). Currently, I am a postdoctoral research associate at the Levich Institute of the City College of New York.
MOST RECENT RESEARCH INTERESTS:
Rheology of dense suspensions, fluid mechanics, CFD