Colloids (particles with characteristic size of 10 nm – 10 microns) adsorb from a liquid phase onto an air/liquid interface experience. Upon adsorption, they experience a reduction in interfacial energy as the surface area of the colloid, formerly in contact with the liquid, now straddles the surface.

This change in interfacial energy arises because the surface of the colloid is now in partial contact with the gas phase, rather than solely with the liquid, and replaces the interfacial liquid that formerly occupied the attaching position. When the colloid only partially wets the liquid, the energy can be substantially negative and much larger than the thermal energy. As a result, the colloids become energetically trapped at the interface, while having the freedom to move along the surface in their own version of Abbot’s Flatland as a two dimensional system. Similarly, colloids can adsorb at the interface between two immiscible liquid phases (e.g. polar (e.g. water) and apolar (e.g. oil) phases when the surface of the colloid only partially wets either phase. Colloids adsorbed to fluid interfaces find traditional applications as stabilizers of emulsions and foams, but more recent applications have focused on assembling the particles into prescribed configurations to be used as templates for materials fabrication, as coatings for superhydrophobic surfaces or, assembled into crystalline lattices, as 2D layers for optoelectronic devices.

To assemble colloids onto a surface, attractive interaction forces are necessary to overcome thermal energy. Interparticle attractions can be caused by capillary forces arising when the fluid interface is not flat up to the particle surface (contact line).

The deformation of the interface surrounding attached particles can result from the natural roughness of the contact lines, or by gravitational (or electrostatic) forces normal to the surface which push the particles down into the liquid (if the particles are more dense than the liquid) or up (if the particles are less dense). The overlap of the menisci surrounding particles causes a reduction in the interfacial energy of the deformation of the fluid interface. Assemblies with regular separations can result as this attraction balances repulsive interactions arising from electrostatic repulsion or magnetostatic forces if the particles have magnetic moments perpendicular to the surface.

Our research has focused on the hydrodynamics of colloids as they translate and rotate over the surface. We have constructed continuum hydrodynamic solutions in flow regimes in which inertial effects are absent (Stokes flows). In particular, we have developed solutions for the drag on a single colloid translating along a surface, and the effect of a lower boundary on this motion. We have used these solutions to predict the pairwise assembly of particles due to capillary attraction, and verified these results on large floating particles that are attracted by capillary forces due to the gravitational deformation of the surface. 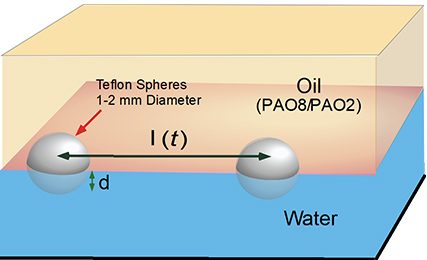 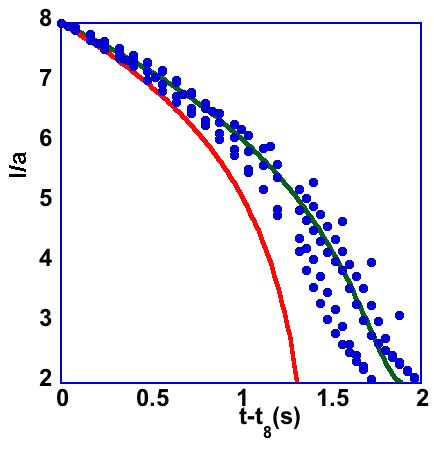 Teflon spheres floating on an interface between oil and water, and approaching each other due to capillary attraction and simulation of approach trajectory without (red) and with (black) hydrodynamic lubrication

We have also constructed continuum solutions of the torque exerted on the particle as it rotates around an axis parallel to the surface. This rotational motion requires the contact line to advance over one portion of the surface and recede over the opposite face, and we have computed the torque as a function of the slip on the surface.

With Joel Koplik of the Levich Institute, we have studied the diffusion of nanoparticles along a surface, and their translation and rotation due to an applied force on a vapor/liquid surface using molecular dynamics (MD) simulations. The liquid is a tetrameric Lennard-Jones fluid, and the colloid is an assembly of smaller particles in a closed packed configuration to simulate a surface roughness. We have used this MD model to study the effect of surface roughness, the role of contact line hysteresis due to surface roughness in the particle rotation and have compared with continuum results. 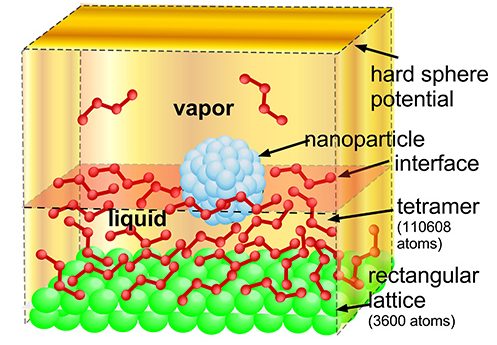 MD simulations of a nanoparticle diffusing along a surface for two different affinities of the particle to the liquid (i.e. different contact angles)